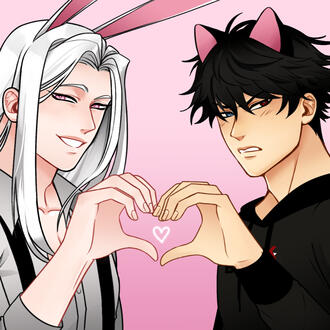 As part of our drive to create responsible media, the following page details content warnings for our visual novel, Adopt A Boyfriend.
While the tone of the visual novel is light, on the whole, there are mentions throughout of some themes that may be upsetting.This guide may contain spoilers.Think we've missed something, or want to get in touch?

Brief Details:Alcohol Consumption
BDSM/D&S/Power Dynamics/Kink
Blood/Minor Injury
Intimate Partner Abuse (Emotional/Mental) - Mentions
Mental Health - Mentions
Parental Neglect
Parental Control
Profanity
Self Harm - Mentions
Sexual Acts/ThemesDetailed Descriptions:Alcohol Consumption
In multiple chapters, the characters enjoy alcohol socially and have a positive relationship with it.BDSM/D&S/Power Dynamics
In Aramis's route, he acts dominant and sexual towards the MC. In the good end, they discuss MC's reason for wearing their choker is related to kink, and hint that they both enjoy D/S dynamics. In the bad end, it is confirmed the two are in daddy dom/sub relationship.
In Kujo's route, he and the MC discuss his kink for photography and public play. MC also teases Kujo with dominance, and phrases like "good boy". Kujo is consenting and enjoys the teasing of this dynamic, especially in the good end.Blood
In Aramis's route, the MC stubs their toe, which bleeds in a minor way.
In Kujo's route, the MC accidentally cuts themself and bleeds, but does not require medical attention.
No blood is displayed visually.Intimate Partner Abuse
In Kujo's route, he discusses his past relationship with his ex who exhibited abuse, controlling, and coercive behaviour. This occurred in the past.
In the bad end exclusively, Kujo and MC's relationship takes a more sour turn, exhibiting unhealthy behaviours/dynamics and a brief mention of dubious consent. While their relationship is not as harmful as his previous one, this ending may be uncomfortable for people who are sensitive in this area and wish to avoid a more intense exploration of this subject.Mental Health
In Kujo's route, he experiences a mild panic attack, and shows signs of dealing with past trauma.Parental Neglect
In Aramis's route, he is shown to not have a strong relationship with his parents, and it is hinted they were emotionally neglectful and not present during his childhood.Parental Control
In Kujo's route, it is briefly touched on the fact that his parents also persuaded his decisions as an adult in regards to his education.Profanity
Profanity is used throughout, specifically by Kujo - words include: shit, fuck, etc.Self-harm
In Kujo's route, the MC accidentally cuts themself preparing food, and afterwards Kujo reveals his ex used to self-harm and blackmail him with it. No self-harm occurs in the story.Sexual Acts/Themes
Sexual comments are made throughout both in the MC's thoughts, and in discussions with other characters. There are frequent mentions of sexual feelings and innuendo throughout. In later chapters, there are shirtless scenes.
In Aramis's route good end, he and the MC kiss, as well as touch sexually through clothing. They also get undressed.
In Kujo's route, the MC and Kujo kiss and MC begins to undress Kujo, as well as touch him sexually.